3 things all rescuers should know about tripods

Let’s get things straight first, before I move on: Rope Rescue requires highly specialized knowledge, and I only wish I possessed such extensive knowledge. However, I do know a lot about our Profix Max rescue strut system and its accessories such as the tripod. Quite recently I had the opportunity to use the Resqtec tripod with some hard-core rope rescuers, which has led me to some very docile finding. Findings that made me very eager to share them with you.

One of the many questions that I get asked frequently is whether or not our tripod (or bipod or monopod for that matter) can be used with extensions. The answer is simple: you can. But when you do use them, some basic rules apply. These are the 3 most vital ones:

1. Recognizing the benefits and limitations of your tools is the starting point of any operation that requires the deployment of equipment. Tripods are often stand-alone units that are purely and only meant to serve as a tripod. Profix Max however, as part of the ‘Octopus’ system as a lot of you may know it by, is a strut that can be used for many different applications. It is therefore of utmost importance to recognize the ‘rules of engagement’ for tripod applications.

WEIGHT IS NOT A DOWNSIDE

For example: a tripod built with Profix Max is slightly heavier compared to stand-alone tripods. I know a lot of people think that’s a downside. I know I did when I was first introduced to the rescue business. But let me tell you this: weight is not a downside! What people forget is that a tripod’s stability is partly based on its own sheer weight. Just imagine trying to push a 95 kg person or a 55 kg person out of balance: the first would require more force than the latter. The same principle applies to tripods. So, a heavier tripod isn’t necessarily a downside. Better yet, it intrinsically provides more stability.

Secondly, the Profix Max can easily extend, and connecting and disconnecting different attachments and extensions is easy as breathing. This makes the system extremely versatile, as various set-ups can quickly be made. In case of a Tripod, that feature does require you to take some extra precautions. Which brings me to the next vital point:

2. Securing the tripod is perhaps even the most essential part of using a pod properly. Everybody in the rescue industry knows personal safety is key to any successful rescue operation. To safely use the tripod, the following considerations must be regarded:

As I said before the Profix Max, used as a tripod’s leg, can still be extended without difficulty. This means that, when a side force is applied on the tripod – which usually occurs when a pulling force is applied from outside the tripod’s ‘footprint’ – one or more legs will extend automatically. To prevent this, the pod must be properly secured. Simply use ratchet straps, often readily available in the fire & rescue service, to strap it down from the tripod’s head to the base of its legs. Of course other means to secure the pod can be used as well.

Tip: use the straps in combination with carabiners as anchor points. This makes it easier to use additional straps on one anchor point.

BASICALLY EVERYTHING JUST NEEDS TO BE TIED TOGETHER

The Profix Max was originally designed to deal with downward forces, because upward forces are usually not applicable. Upward forces, however, do occur when a force comes from outside the pod’s footprint. To counteract those forces, proper securement is needed. Basically everything just needs to be tied together, to create one whole out of several interconnectedparts. When the legs are properly secured, using extensions offers amazing solutions. And that’s exactly where using the Profix Max to create tripods becomes really interesting: with any Profix Max strut you already had for other applications such as Road Traffic Accidents or structural stabilization, and with a few simple add-ons, you can create a tripod that easily reaches higher than 2 meters!

3. Side forces caused by pulling from outside the footprint are a thing on its own when using tripods. Apart from causing the need for additional securement, they also dictate how you should position the pod.

LET THE FORCE FLOW THROUGH THE POD’S LEGS

Positioning it incorrectly, as shown in image A, can cause the pulling force to pull the tripod out of position, especially when the winch is placed further away. This is because the force is not guided through its legs. Instead, it is best to teach yourself to position it differently. When the side force is guided straight through one of its legs, as shown in image B, the pod will remainperfectly in place. Of course there are some additional rules and exceptions that apply for positioning a tripod and pulling from aside, but that’s for another time. The core is: teach yourself to let the force flow through the pod’s legs as much as possible.

As I said in the beginning, Rope Rescue requires highly specialized knowledge to successfully perform rescue operations, so obviously there’s a lot more to tell about using (Resqtec) tripods. To describe all of them would require a lot more words than I’ve already used, so I’ll stick to these 3 vital ones. What matters most is common sense: think well of what you’re dealing with and what can happen during the deployment of your equipment, and act accordingly.

If you have any questions or remarks, please do share them with us here! Because sharing knowledge is the only thing we can all do to keep improving the rescue industry. Stay safe! 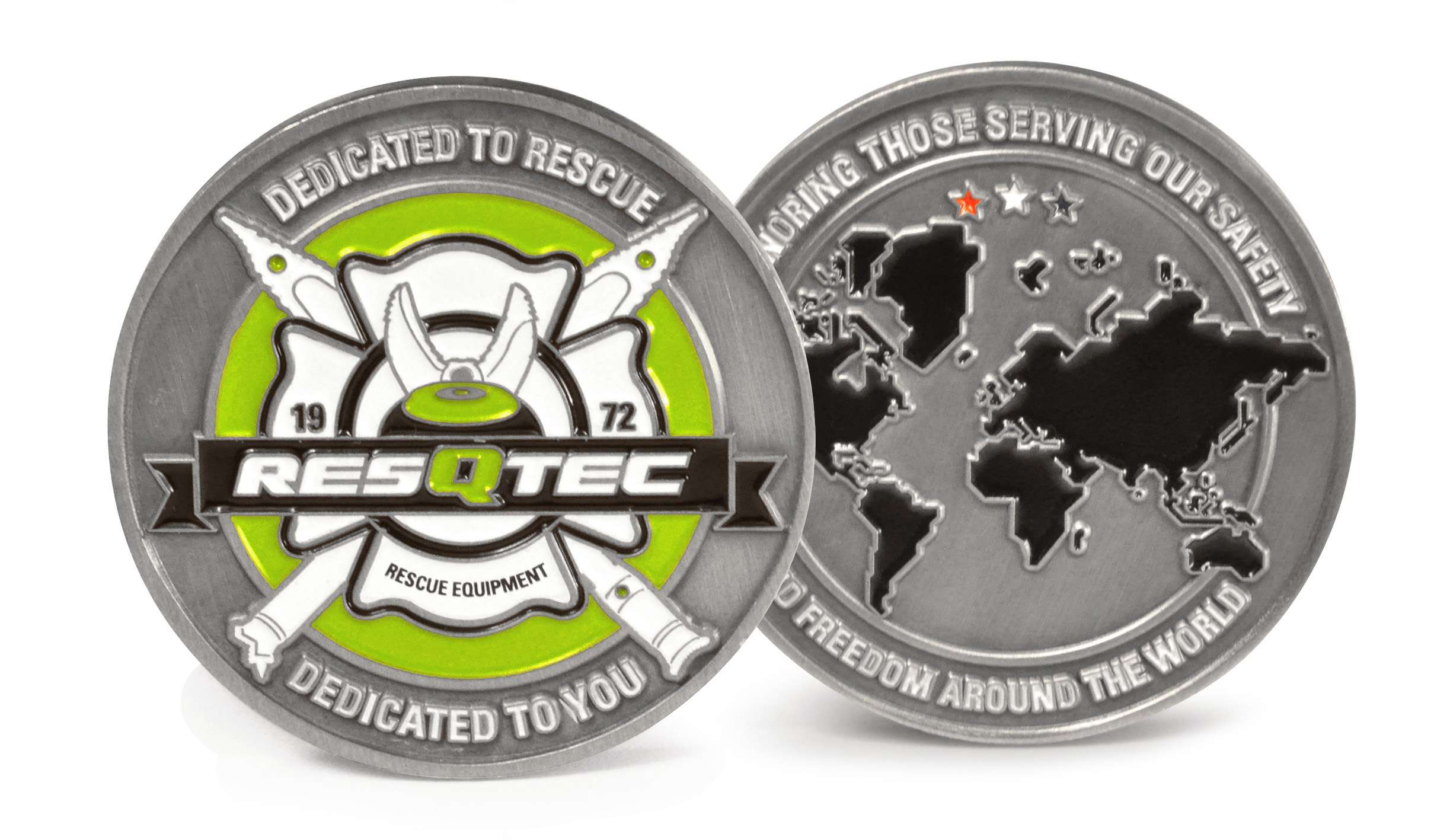 THE CHALLENGE COIN; are you up for a challenge?

Questions, issues or concerns? I'd love to help you!